UNITAID has made a name for itself by creating the market for child-friendly HIV medicines but did you know it is also one of the world’s largest funders of tuberculosis (TB) medicines for kids? 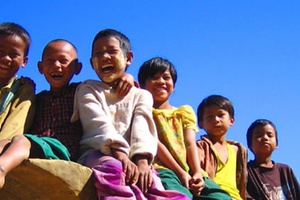 We’re bringing this up this because 24 March 2012 is World TB Day – an opportunity to raise eyebrows about the oft-neglected facts about this infectious disease. This year, the Stop TB Partnership is focusing on the 'hidden epidemic' of childhood TB. With good reason: TB in children is on the rise with as many as 70 000 child deaths and almost 50 000 new cases every year. Infants and young children are at special risk of suffering from severe forms of TB that can leave them blind, deaf, paralysed or mentally disabled.

“It costs 50 cents a day to provide treatment that will cure the disease,” says Dr Lucica Ditiu, Executive Secretary of the Stop TB Partnership, which brings together almost 1000 organizations. “From now on let us agree: It is unconscionable to let a single child die of TB.”

Despite the number of cases, TB treatment for children remained neglected until UNITAID began addressing it in 2007. Through a grant provided to the Stop TB Partnership’s Global Drug Facility, UNITAID began to “create the market” for child-adapted TB medicines by increasing the number of manufacturers and stimulating competition between them. Through this work, over 900 000 curative and preventive treatments were provided for children in 57 countries. UNITAID helped facilitate the development of child-adapted medicines and brought the first-ever quality paediatric TB medicines to market.

Using a market approach, UNITAID is now one of the largest providers of quality child-friendly TB medicines, second only to the Global Fund to Fight AIDS, Tuberculosis and Malaria. After all, this child-centric approach works for children living with HIV. Over 350 000 children are receiving life-sustaining HIV treatment thanks to UNITAID’s intervention in the paediatric market to produce HIV treatments in an easy-to-take form.

But unfortunately, childhood TB remains a difficult market, with high production costs and changing guidelines for children. Initially, UNITAID grants enabled price reductions of up to 30% for key child TB formulations. In 2010, the World Health Organization changed its guidelines for treating children with TB, recommending higher dosages. The new formulations are not expected to be on the market for another two years.

UNITAID continues to push for better paediatric medicines to ensure that no children are left behind.