For too long, tuberculosis has not received sufficient attention. The result of this neglect is needless suffering: in 2010 alone, nearly 9 million people fell ill with TB and 1.4 million died, with 95 per cent of these deaths occurring in developing countries. These numbers make tuberculosis the second top infectious killer of adults worldwide. 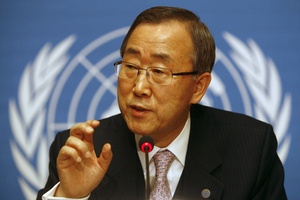 The impact reverberates far beyond the individuals directly affected. TB takes a heavy toll on families and communities. Millions of children have lost their parents. Children who are exposed to sick family members are at high risk of contracting the disease. Far too many go untreated, since TB is often difficult to diagnose and treat in children. That is why this year we should aim to expand awareness of how children are affected by the disease.

It is critical to support those who lack the means to respond with the care and treatment they need to enjoy healthy and productive lives.

With the right interventions, we can make a major difference. We know how to end all forms of TB, including multi-drug resistant TB - which has emerged in most countries - before it leads to severe manifestations that are costly to treat and cause additional suffering. Where we have taken strong and proven measures, the number of people falling ill with TB has declined markedly.

The World Health Organization reports that our concerted efforts have helped to cut death rates by 40 per cent since 1990. Forty-six million people have been cured and seven million lives have been saved since 1995 thanks to the efforts of the United Nations, governments, donors, civil society groups, private partners, public health experts, and tens of thousands of health workers and affected families and communities.

Now is the time to be even more ambitious and "Stop TB in our lifetime," the theme of this year's World TB Day.

I call for intensified global solidarity to ensure that all people are free from fear of tuberculosis and its devastating effects. Let us vow to end the neglect of TB and to end deaths from this disease in our lifetime.

Read the message in: