Cutting off the head of the TB snake in Africa: Declaration on TB and mining in Africa draws closer

9 March - Johannesburg - Momentum is building towards a declaration on tuberculosis (TB) and mining that would set member states of the Southern African Development Community (SADC) on a course towards freeing miners, their families and communities from TB. 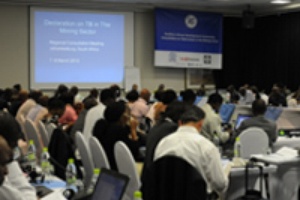 At a SADC stakeholders meeting in Johannesburg held from 7 to 8 March, representatives from governments, trade unions, the private sector, nongovernmental organizations and donors provided their input to a declaration and code of conduct on TB in the mining sector which are due for signature by SADC heads of state in Maputo, Mozambique, in August.

The estimated half a million mine workers in South Africa have the highest TB incidence in the world, with an estimated 3 to 7% of mine workers developing active TB a year. The mining industry is heavily dependent on migrant workers from rural areas and from surrounding countries, particularly Lesotho, Swaziland, Mozambique and Zimbabwe.

Opening the SADC meeting, David Mametka, the head of South Africa's national TB programme said that the head of the 'TB snake' is in South Africa, with its fangs in the country's mines and its tail reaching out to neighbouring countries.

Supported by the Stop TB Partnership, the World Bank and the International Organization for Migration (IOM) and other partners, SADC is now formulating a declaration which will set out priority areas for action in the region, as well as roles and responsibilities for all stakeholders involved.

Here is what partners had to say about the meeting:

"We have launched a new national strategy which includes a vision full of zeros - zero infections from TB, zero stigma from TB and zero TB deaths. This way we aim to cut off the head of the TB snake."
David Mametja, head of the national TB programme in South Africa.

"Ministers have asked the Stop TB Partnership to fully engage with TB and mining and bring high-level attention to the issue. I am happy to say that the board and secretariat, along with partners such as the World Bank, IOM, the World Health Organization, the Commonwealth and others, have responded. This SADC-led stakeholders meeting to draft a declaration is an important breakthrough."
Dr Jeremiah Chakaya, representing the Stop TB Coordinating Board.

"Tuberculosis among miners and ex-miners in Southern Africa is a multisectoral challenge, so the solution must bring together ministries of health, labor and finance from several countries along with the private sector and civil society. The status quo, where fierce disagreements about responsibility, culpability, and financial obligation mean the response is fragmented and uncoordinated, is far more expensive than the resources that would be required to implement a cohesive control strategy based on the principle of partnership. The World Bank is undertaking economic analysis of the impact of TB and TB-HIV in the mining sector to support the development of a regional action plan that builds on the SADC declaration."
Patrick Osewe, Lead Health Specialist Southern Africa Region.

"Lesotho is particularly hard hit by the issue of TB and mines but clear leadership has been shown by the ministers of health of South Africa, Lesotho, Swaziland and SADC. I congratulate SADC for leading the regional response to this issue which has been affecting Africa for a century. Enough talking has been done. It's now time for action. I hope that the declaration will help us in Lesotho achieve our vision of zero TB deaths."
Dr Llang Maama, head of the national TB programme in Lesotho

"This meeting is not the time to point fingers and blame. That's not what we need, we are here to make a solution to stop TB. We have to develop a shared vision and we need leadership from companies, civil society, unions and other stakeholders."
Brian Brink, Chief Medical Officer for Anglo American

"The issue of TB and mining in SADC countries is of particular concern to the Commonwealth given that the majority of SADC members are also Commonwealth states. The Commonwealth is in a unique position because it not only has states including those that have the highest TB burdens in the world but also members who are leaders in the mining industry and others who are donors to TB control efforts globally who at the same time have significant overseas mining operations. The regional dimensions of this issue mean that stronger collaboration between Commonwealth states is essential in transforming the continental and global response to this problem."
Mbolowa Mbikusita-Lewanika, health adviser at the Commonwealth secretariat

"It seems that Africa is not on track to reach the Millennium Development Goal of reducing TB deaths by 50% by 2015. But there is strong leadership and a huge amount of energy in the region. I think that we can draw on this to make a breakthrough in Africa that will inspire the rest of the world."
Lucica Ditiu, Executive Secretary of the Stop TB Partnership