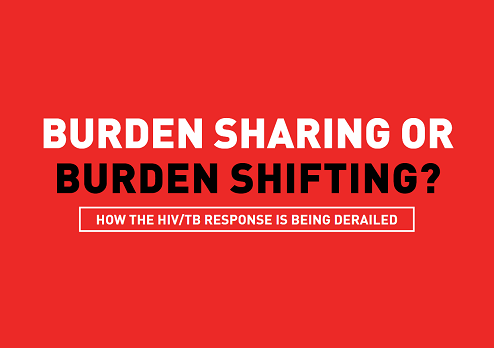 In advance of Global Fund replenishment conference, MSF releases report showing that many countries are not financially ready to cover HIV/TB response alone as global funding and political interest wanes.

NEW YORK/GENEVA/BRUSSELS, OCTOBER 7, 2019 — A decline in international funding could reverse lifesaving gains and cause an “epidemic rebound” of HIV and tuberculosis (TB) in some countries, said Doctors Without Borders/Médecins Sans Frontières (MSF) Monday in a report released ahead of The Global Fund to Fight AIDS, Tuberculosis, and Malaria’s replenishment conference. The international medical humanitarian organization warned donors that neglecting the program now and shifting financial burden to affected countries after a decade of strong commitments to fight these diseases would hurt people all over the world.

“Some of the countries reviewed in this report—such as the Democratic Republic of Congo, Guinea, and Mozambique—are struggling with conflict or political and economic problems,” said Dr. Mit Philips, MSF’s health policy and advocacy advisor and one of the contributing authors of the report. “Yet, they are under pressure to swiftly mobilize additional resources for HIV and TB within restricted budgets and with insufficient donor funding. This needs a serious reality check.”

Despite the fact that TB and HIV kill approximately two million people each year, donor and domestic funding for HIV programs declined in 2018 for the first time in more than a decade (falling by $1 billion in low- and middle-income countries) and the funding gap for TB programs widened further (reaching $3.5 billion), according to United Nations figures. The United States is the Global Fund’s largest donor.

“Every day, MSF teams in these countries witness how patients are suffering and dying from these treatable diseases,” said Dr. Maria Guevara, MSF’s senior operational positioning and advocacy advisor and another of the report’s contributing authors. “The number of people on lifetime HIV treatment keeps on expanding, but the money available to support them keeps on shrinking. With not enough drugs or support services available, many people are not starting treatment on time or are forced to abandon treatment altogether. Others must dig deep into their pockets to pay for drugs so as not to interrupt their treatment. All of this contributes to increased transmission, higher mortality, increased treatment failures, and an even higher prevalence of drug resistance—further increasing the cost of care for HIV and TB.”

According to MSF’s report, the impact of current HIV and TB funding gaps are underestimated and likely to increase as vulnerable countries struggle to compensate for the decline in external financial support. Even where the political will exists to contribute more, many countries are not ready to take on this responsibility in the short term.

Considering the existing economic and fiscal challenges, the authors of the report call for a comprehensive assessment of countries’ real ability to increase domestic health resources in the short term, given the impact of funding cuts on the lives of people living with HIV and TB and the ability of health workers to care for them.