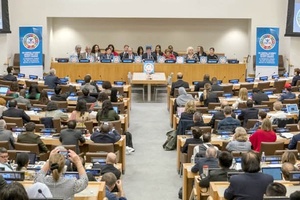 United Nations, New York, June 6, 2018 — Global tuberculosis advocates who converged on the United Nations and UN missions this week for the civil society hearing of the UN High-Level Meeting on Ending TB – scheduled to take place on September 26th – discussed a wide variety of challenges to ending TB as a global public health threat, from a lack of effective tools like point-of-care diagnostics and vaccines to challenges in reaching the four million people infected with TB every year who go undetected. Advocates agreed, however, that the biggest challenge isn’t a scientific or medical one – it’s a lack of political will to tackle the world’s biggest infectious disease killer.

“Who is being left behind in the global TB response is no accident,” Joanne Carter, executive director of RESULTS, said. “The TB bacteria doesn’t discriminate but politics do – the most vulnerable groups are systematically left out from quality treatment and other services,” she said.

Those groups include prisoners, miners, migrants, indigenous populations, and children, said Dr. Farhana Amanullah, a pediatrician from Pakistan. Less than half of all children with active TB are diagnosed, she said, leaving half a million children without necessary treatment. Amanullah said UN member states need to commit to finding and treating 3.4 million children and providing prevention to another nine million over the next four years to achieve global targets on eliminating TB.

Lack of political will is further highlighted by lack of funding, Miroslav Lajcak, President of the UN General Assembly said. In 2017 there was a funding gap of $2.3 billion for preventing, detecting and treating TB, he said.

“We’re all tired of fighting nickel and dime for TB,” Dr. Eric Goosby, UN Special Envoy on TB, said. “We’re tired of TB being less than the center of attention, but this hearing begins the moment when we pivot into an accelerated response,” he said.

“We must be aggressive in insisting the U.S. and other donor countries continue to support and increase resources,” Goosby said. “If compassion doesn’t win our leaders over, let’s remind them that fighting TB is one of the best investments in global health,” he said.

Hundreds of advocates joined UN, World Health Organization and Stop TB officials in packing the room for the day-long event meant for UN country missions to hear from experts and civil society on priorities for ending the TB epidemic – however only 20 country missions were in attendance, further highlighting a lack of political will, advocates said.

UN missions began negotiations on the first iteration of the political declaration that will result from the High-Level Meeting, and will continue negotiations until the end of June.

Videos from the Interactive Civil Society Hearing are available online and can be watched here.