The World Health Organization has revamped its Civil Society Task Force on TB to strengthen collaboration for accelerating progress towards ending TB. 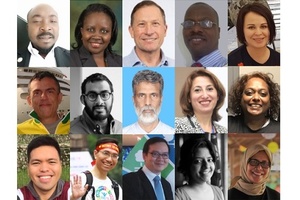 12 December 2018 - As countries are beginning to ramp up efforts to end TB following commitments made by Heads of State at the first-ever UN High-Level Meeting on TB (UN HLM) in September 2018, the role of civil society in driving action and accountability is more important than ever.

The UN HLM political declaration and WHO End TB Strategy both call for prioritizing strong and meaningful engagement of civil society and affected communities in all aspects of the TB response. The World Health Organization (WHO) has revamped its Civil Society Task Force on TB (CSTF) to strengthen collaboration for accelerating progress towards ending TB.

The revamped task force is a culmination of the commitments made by WHO’s Director-General Dr Tedros Adhanom Ghebreyesus to strengthen civil society engagement, as discussed at several consultations with civil society representatives, starting from the Ministerial Conference on Ending TB which took place in Moscow in November 2017.

“The establishment of the revamped task force is a timely and much-needed step at this historic moment for the fight to end TB,” said Dr Tereza Kasaeva, Director of WHO’s Global TB Programme. “The commitments made by Heads of State at the UN High Level Meeting on TB now need to be urgently translated to action, the role of civil society will be crucial in making this a reality. The WHO Global TB Programme warmly welcomes the new members of the task force and looks forward to ushering a new era of collaboration.”

Role of the task force

The Task Force will emphasize key actions to drive stronger civil society engagement in efforts to end TB including:

Fifteen members were selected with inputs from an independent Selection Panel, consisting of representatives from USAID, RESULTS, and Community Delegation to the Unitaid Board. Selection was based on assessments of individual competencies and experiences and the process aimed to balance geography, gender, and the diversity of communities and civil society representatives.

The fifteen selected members are listed below:

To learn more about the members of the WHO Civil Society Task Force, please see their biographies.

More information on the functions and selection of the WHO Civil Society Task Force can be found in the terms of reference.

Please contact Lana Syed at syedl@who.int for any questions or clarifications.