On May 30th, 2017, in Odesa, Ukraine, the Mayor of Odesa Gennadiy Trukhanov signed the ‘Declaration of Interest to Alignment of Odesa city with the Zero TB Initiative’ with Stop TB Partnership. This makes Odesa the first city in Ukraine and entire region of Eastern Europe and Central Asia joining the initiative. 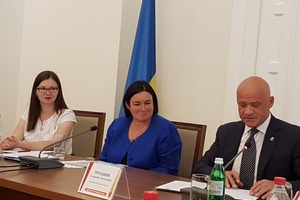 ‘The Zero TB Initiative aims to drive us towards ending TB by focusing on local government participation to drive and maintain successes against TB. A combination of political will, knowledgeable health professionals, and mobilized communities are the recipe to end TB. I am pleased that Odesa is joining the initiative today,’ commented Dr Lucica Ditiu, Executive Director, Stop TB Partnership.

Tuberculosis remains the most common AIDS-related disease in Ukraine. Ukraine ranks 5th in the world on MDR-TB (hardest to treat forms) burden. In Ukraine the incidence of TB is 70.5 per 100 thousand population, which amounted to almost 30,000 cases in 2016. In Odesa in 2016, the incidence of TB was even higher at 110.1 which means 1,113 new infections detected.

A challenge is that Ukraine has one of the lowest treatment success rates in the EECA region: 72% among drug susceptible TB cases and 39% – among MDR-TB patients (while the WHO indicator is 85%). In Odesa, cure rates are very low, at the level of 43.2% in 2016 among smear positive patients (56.9% among new cases). The reasons of low treatment success rates are high level of HIV/TB co-infections, high level of treatment interruptions and existing health models that are not patient-focused.

‘Tuberculosis is one of the most dangerous infectious diseases of all the mankind. TB does not have borders and only through our joint efforts we can stop the spread of this disease. From its side, Odesa is ready to affront this plague of the XXI century. For this purpose, we use not only our own expertise in TB detection and treatment, but also the best practices of the developed European countries. We are also eager to share our knowledge with other participants of the Zero TB Cities Initiative,’ – pointed out Odesa mayor, Gennadiy Trukhanov.

Through participation in the Zero TB Cities Initiative, Odesa will have access to international TB expertise, training and exchange with the most successful TB responses as well as support in the development of its City TB Plan. Operational research that will start in 2017 as part of the Fast-Track HIV/TB Responses for Key Populations in EECA Cities Global Fund project will focus on improving treatment success rates through promotion of the ambulatory care models and motivation of primary healthcare personnel based on treatment outcomes.

Baroness Alison Suttie, member of the House of Lords of UK Parliament who attended the signing ceremony said: ‘I think it is extremely important to encourage politicians to play a more active role in the fight against TB and I have been working with Ukrainian parliamentarians to promote this. It is impressive to see the mayors playing a growing role as well and I think this experience could be followed by other Ukrainian cities and other cities in the region”.

Alliance for Public Health is a leading non-governmental professional organization established in 2000 making a significant impact on the epidemics of HIV/AIDS, tuberculosis, viral hepatitis and other socially dangerous diseases in Ukraine and providing support on responses globally.

The Stop TB Partnership is leading the way to a world without tuberculosis (TB), a disease that is curable but still kills three people every minute. Founded in 2001, the Partnership’s mission is to serve every person who is vulnerable to TB and ensure that high-quality diagnosis, treatment and care is available to all who need it. Together our 1500 partners are a collective force that is transforming the fight against TB in more than 100 countries. They include international and technical organizations, government programs, research and funding agencies, foundations, NGOs, civil society and community groups and the private sector.

Fast-track HIV/TB responses among key populations in cities of Eastern Europe and Central Asia is the Global Fund funded EECA regional project of Alliance for Public Health (Ukraine), AFEW International (The Netherlands), licit (Switzerland) and Stop TB Partnership under technical guidance of UNAIDS EECA office which is there to support city responses to HIV and TB in key populations in the five cities of EECA, including Odesa. The project will be implemented throughout 2017-2019 and plans to develop efficient and sustainable city models of HIV/TB responses that would allow to reduce AIDS and TB mortalities in the project cities as well as increase the allocation of city funding to HIV/TB interventions for key populations.

TB in Eastern Europe and Central Asia Project on Strengthening Health Systems for Effective TB and DR-TB Control funded by the Global Fund is there to decrease the burden of tuberculosis disease and halt the spread of drug resistance in target EECA countries through increasing political commitment and translating evidence into implementation of patient-centered TB models of care. The Principal Recipient of the Global Fund grant is PAS Center (Moldova). Alliance for Public Health is an implementing partner of the project on behalf of TB Europe Coalition, responsible for the civil society advocacy in support of the people-centered TB care in the region of Eastern Europe and Central Asia.