Unless adult TB is stopped, children will continue to contract the scourge

Will improving efficiency and efficacy of tuberculosis control programs within health care facilities help the world meet 2015 targets set by the Millennium Development Goals, the Global Plan to Stop TB, and the country programs, or is a paradigm shift necessary in the basic principles of TB control? 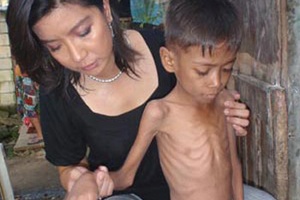 This could be cured.

To some extent, tuberculosis is a hidden disease, thought in the west. to be well on its way to eradication. However, as many as 2 billion people – almost a third of the world population -- are estimated to be infected with the tuberculosis bacterium and are at risk of developing the disease. One in every 10 to 20 of those people can be expected to become sick with active TB in his or her lifetime. If not treated, each of these persons with active TB can infect 10 to 15 people in their lifetimes.

The disease is a leading killer of people living with HIV, as they have much weakened immune systems. According to the latest data, 8.8 million new cases of TB appeared in 2010, killing a staggering 1.4 million people. Many more struggle with the disease, which apart from causing human suffering, slows economic growth. The annual economic loss is estimated to be 0.52 percent of the world’s gross national income. Although poverty driven, TB is present in all continents. It is said that “the situation is serious in Europe, alarming in Africa and worrisome in parts of Asia.”

Experts have repeatedly emphasized that unless adult TB comes under control, children will continue to contract the disease. And unless the change the way TB control is done, adulthood TB is unlikely to be controlled. The TB program is still very medical despite advocacy, investment and the gold standard Patients' Charter for TB Care - which is sadly not implemented to the extent it should have been by the countries.

According to the World Health Organization, the Patients' Charter for Tuberculosis Care outlines the rights and responsibilities of people with TB. It empowers people with the disease and their communities through this knowledge. Initiated and developed by patients from around the world, the Patients' Charter makes the relationship with healthcare providers a mutually beneficial one.

"Pediatric TB is difficult to control, because the infection spreads through the air borne route, and children get it from adults,” said Somya Swaminathan, MD in Paediatric TB, and a scientist at the National Institute for research in Tuberculosis of the Indian Council of Medical Research “So the only way to prevent childhood TB is to tackle adult TB more seriously. Contact to contact TB testing must be done.

Swaminathan recommends that all family members of TB patients, especially children, be tested and started on drug regimens to reduce the burden of pediatric TB. The general awareness level about TB is very poor, even amongst educated people.

“They do not know how it spreads, how it can be diagnosed and treated and what they can do to reduce the burden of TB. As it is an air borne infection, anybody can get it. The most important risk factor in children is malnutrition, as poor nutrition makes one more susceptible to it,” the physician continued. “Other social or environmental causes could be poor housing, overcrowded indoors, indoor air pollution, passive smoking, and to a much smaller extent HIV infection also, as in India HIV prevalence is fairly low.”

Dr Surya Kant, the president of Indian Chest Society (North Zone) and Professor and Head, Department of Pulmonary Medicine, King George's Medical College, now renamed CSM Medical University, said: "Another important risk factor is that we have a large number of adult TB infections that can potentially be transmitted to children. First and foremost measure that can control childhood TB is to early diagnose and successfully treat the adult TB. So all adult TB cases must be treated effectively and priority should be given to those whose sputum is positive for AFB. If we can intervene in early diagnosing and successfully treating adult TB then a secondary outcome will be to effectively control childhood TB."

Unless people who are experiencing the disease or have successfully completed treatment are engaged as equal partners, TB control will continue to be dominated by the medical experts who are undoubtedly doing a great contribution to TB control, but that's clearly not enough. Engaging people who know the best can be the game changer.

People who have completed TB treatment are best "community experts" to share the challenges they faced on daily basis when on TB treatment. These are the challenges which are the potential barriers for many people in benefiting from existing TB control services and should be addressed by the program. The realities of their lives, on day-to-day basis, that continues to put them and their family members at risk of preventable infections such as TB, needs to be brought in, to increase the impact of TB programs.

The challenges people face in getting a proper confirmed TB diagnosis and tolerating the anti-TB treatment, must be recorded and documented - without which the programme will continue to miss a very important piece of the puzzle - and is unlikely to reach the zero mark by 2015 in terms of zero new TB infections and deaths.

As experts said if we can control adulthood TB, childhood TB will automatically taper off. Implementing the Patients' Charter, empowering communities, especially those who have completed TB treatment, to get engaged as equal partners with dignity in TB control, and ensuring the program addresses the needs felt by the people can help us reach the unreached TB patients - adults and children both.